Effective January 1, 2017, Lima Memorial partnered with the Ohio State Highway Patrol Lima Unit to combat the rise of opioid overdose deaths. In an unpleasant statistic that no state wants to claim, a new report shows Ohio leads the nation in opioid overdose deaths. According to the Ohio Department of Health, Ohio had 3,050 unintentional drug overdoses in 2015, an increase of 642 percent from the year 2000. On average, approximately eight people die each day in Ohio due to unintentional drug overdose.

As part of the new partnership, Lima Memorial will provide medical oversight and training to the Ohio State Highway Patrol Lima Unit for their usage of Narcan (naloxone) and will also be the hub for their supply of Narcan to use on individuals who might be experiencing an opioid overdose.  Narcan is the first and only FDA approved naloxone nasal spray that blocks or reverses the effects of an opioid overdose in an emergency situation.

The Lima unit of the Ohio State Highway Patrol may be the first responders to arrive on a scene when an individual is experiencing an overdose. This partnership highlights the importance of our first responders and will keep highway patrolmen equipped with the naloxone that has proven itself as an important weapon against deadly overdoses.

“We are grateful to be partnering with the Ohio State Highway Patrol,” states Lima Memorial Doug Larue, EMS Coordinator. “This partnership will save lives and keep officers armed and at the ready to aid an overdose victim.” 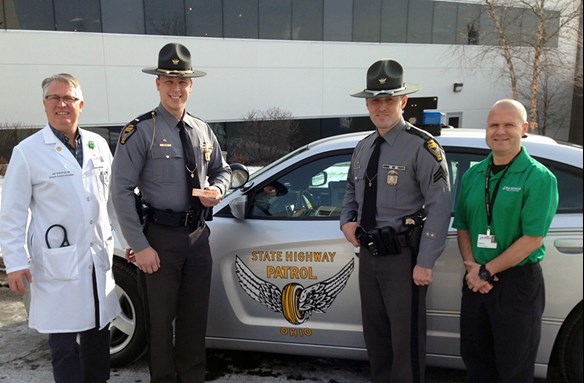