Bile duct obstruction is a blockage in the tubes that carry bile from the liver to the gallbladder and small intestine.

Bile is a liquid released by the liver. It contains cholesterol, bile salts, and waste products such as bilirubin. Bile salts help your body break down (digest) fats. Bile passes out of the liver through the bile ducts and is stored in the gallbladder. After a meal, it is released into the small intestine.

Bile is a fluid that is made and released by the liver and stored in the gallbladder. Bile helps with digestion. It breaks down fats into fatty acid...

The bilirubin blood test measures the level of bilirubin in the blood. Bilirubin is a yellowish pigment found in bile, a fluid made by the liver. Bi...

When the bile ducts become blocked, bile builds up in the liver, and jaundice (yellow color of the skin) develops due to the increasing level of bilirubin in the blood.

The possible causes of a blocked bile duct include:

The risk factors for a blocked bile duct include:

The blockage can also be caused by infections. This is more common in people with weakened immune systems.

Your health care provider will examine you and feel your belly.

The following blood test results could be due to a possible blockage:

The following tests may be used to investigate a possible blocked bile duct:

A blocked bile duct may also alter the results of the following tests:

The goal of treatment is to relieve the blockage. Stones may be removed using an endoscope during an ERCP.

In some cases, surgery is required to bypass the blockage. The gallbladder will usually be surgically removed if the blockage is caused by gallstones. Your provider may prescribe antibiotics if an infection is suspected.

If the blockage is caused by cancer, the duct may need to be widened. This procedure is called endoscopic or percutaneous (through the skin next to the liver) dilation. A tube may need to be placed to allow drainage.

If the blockage is not corrected, it can lead to life-threatening infection and a dangerous buildup of bilirubin.

If the blockage lasts a long time, chronic liver disease can result. Most obstructions can be treated with endoscopy or surgery. Obstructions caused by cancer often have a worse outcome.

The term "liver disease" applies to many conditions that stop the liver from working or prevent it from functioning well. Abdominal pain or swelling...

Left untreated, the possible complications include infections, sepsis, and liver disease, such as biliary cirrhosis.

Sepsis is an illness in which the body has a severe, inflammatory response to bacteria or other germs.

Cirrhosis is scarring of the liver and poor liver function. It is the last stage of chronic liver disease.

Be aware of any risk factors you have, so that you can get prompt diagnosis and treatment if a bile duct becomes blocked. The blockage itself may not be preventable. 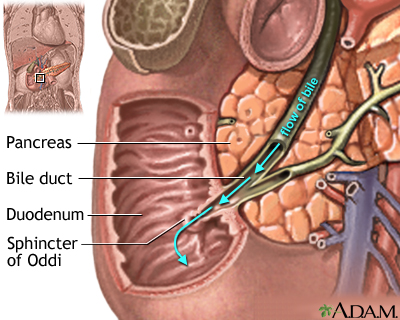 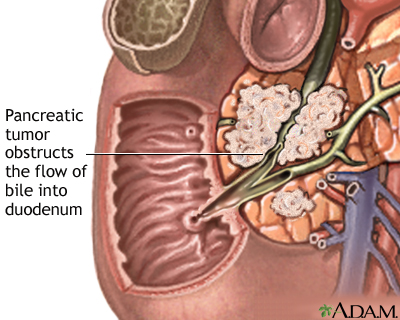 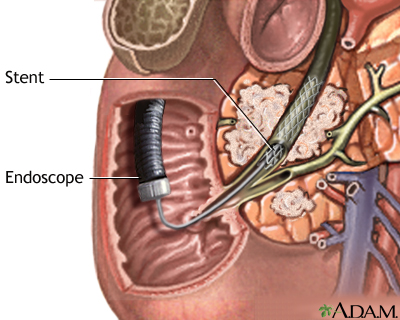 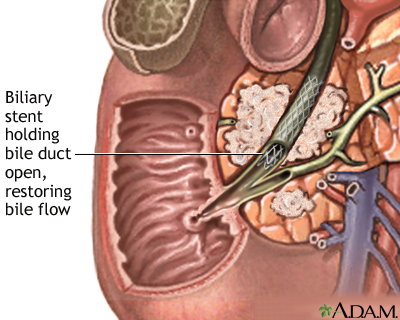 All rights reserved.
Content is best viewed in IE9 or above, Firefox and Google Chrome browser.