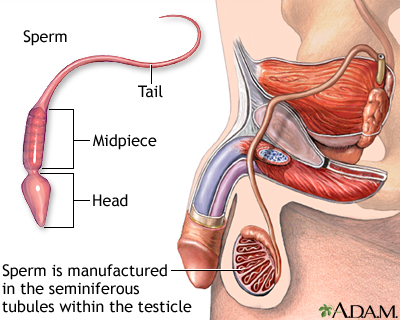 The male reproductive system creates sperm that is manufactured in the seminiferous tubules within each testicle. The head of the sperm contains the DNA, which when combined with the egg's DNA, will create a new individual. The tip of the sperm head is the portion called the acrosome, which enables the sperm to penetrate the egg. The midpiece contains the mitochondria which supplies the energy the tail needs to move. The tail moves with whip-like movements back and forth to propel the sperm towards the egg. The sperm have to reach the uterus and the fallopian tube in order to fertilize a woman's egg.