A condom is a thin cover worn on the penis during intercourse. Using a condom will help prevent:

Condoms for women can also be purchased.

The female condom is a device used for birth control. Like a male condom, it creates a barrier to prevent the sperm from getting to the egg....

The male condom is a thin cover that fits over a man's erect penis. Condoms are made of:

The penis is the male organ used for urination and sexual intercourse. The penis is located above the scrotum. It is made of spongy tissue and bloo...

Condoms are the only method of birth control for men that are not permanent. They can be purchased at most drugstores, in vending machines in some restrooms, by mail order, and at certain health care clinics. Condoms do not cost very much.

HOW DOES A CONDOM WORK TO PREVENT PREGNANCY?

If the sperm contained in a male's semen reach a woman's vagina, pregnancy may occur. Condoms work by preventing sperm from coming in contact with the inside of the vagina.

If condoms are used correctly every time intercourse occurs, the risk of pregnancy is around 3 out of every 100 times. However, there is a higher chance of pregnancy if a condom:

Condoms do not work as well at preventing pregnancy as some other forms of birth control. However, using a condom is much better than not using birth control at all.

Some condoms contain substances that kill sperm, called a spermicide. These may work slightly better to prevent pregnancy.

A condom also prevents the spread of certain viruses and bacteria that cause diseases.

HOW TO USE A MALE CONDOM

The condom must be put on before the penis comes into contact with the outside of the vagina or enters the vagina. If not:

The condom must be put on when the penis is erect, but before contact is made between the penis and vagina.

Make sure you have condoms around when you need them. If no condoms are handy, you may be tempted to have intercourse without one. Use each condom only once.

Store condoms in a cool, dry place away from sunlight and heat.

If you feel a condom break during intercourse, stop right away and put on a new one. If semen is released into the vagina when a condom breaks:

PROBLEMS WITH CONDOM USE

Some complaints or problems with condom use include: 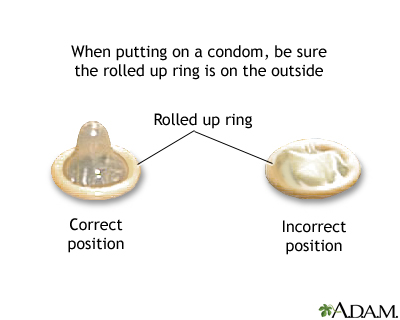 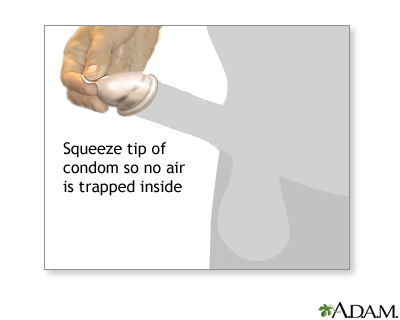 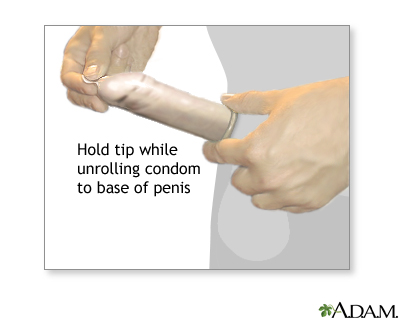