A mastoidectomy is surgery to remove cells in the hollow, air-filled spaces in the skull behind the ear within the mastoid bone. These cells are called mastoid air cells.

This surgery used to be a common way to treat an infection in mastoid air cells. In most cases, the condition was caused by an ear infection that spread to the bone in the skull.

You will receive general anesthesia, so you will be asleep and pain free. The surgeon will make a cut behind the ear. A bone drill will be used to gain access to the middle ear cavity that is behind the mastoid bone in the skull. The infected parts of the mastoid bone or ear tissue will be removed and the cut is stitched and covered with a bandage. The surgeon may put a drain behind the ear to prevent fluid from collecting around the incision. The operation will take 2 to 3 hours.

Why the Procedure Is Performed

Mastoidectomy may be used to treat:

You may need to stop taking any medicines that make it hard for your blood to clot 2 weeks before your surgery, including aspirin, ibuprofen (Advil, Motrin), naproxen (Aleve, Naprosyn), and some herbal supplements. Your health care provider may ask you not to eat or drink after midnight the night before the procedure.

You will have stitches behind your ear and there may be a small rubber drain. You may also have a large dressing over the operated ear. The dressing is removed the day after surgery. You may need to stay in the hospital overnight. Your provider will give you pain medicines and antibiotics to prevent infection.

Mastoidectomy successfully gets rid of the infection in the mastoid bone in most people. 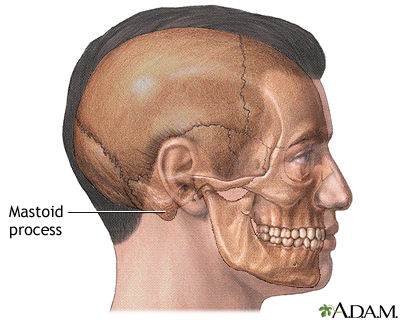 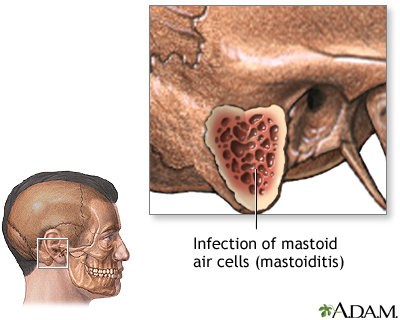 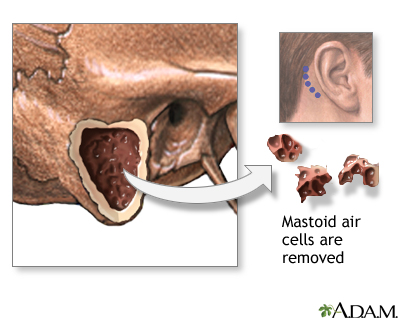