Clubfoot is a condition that involves both the foot and lower leg when the foot turns inward and downward. It is a congenital condition, which means it is present at birth.

Clubfoot is the most common congenital disorder of the legs. It can range from mild and flexible to severe and rigid.

The cause is not known. Most often, it occurs by itself. But the condition may be passed down through families in some cases. Risk factors include a family history of the disorder and being male. Clubfoot can also occur as part of an underlying genetic syndrome, such as trisomy 18.

Trisomy 18 is a genetic disorder in which a person has a third copy of material from chromosome 18, instead of the usual 2 copies. Most cases are no...

A related problem, called positional clubfoot, is not true clubfoot. It results from a normal foot positioned abnormally while the baby is in the womb. This problem is easily corrected after birth.

The physical appearance of the foot may vary. One or both feet may be affected.

The foot turns inward and downward at birth and is difficult to place in the correct position. The calf muscle and foot may be slightly smaller than normal.

The disorder is identified during a physical examination.

A foot x-ray may be done. Ultrasound during the first 6 months of pregnancy can also help to identify the disorder.

Treatment may involve moving the foot into the correct position and using a cast to keep it there. This is often done by an orthopedic specialist. Treatment should be started as early as possible, ideally, shortly after birth, when it is easiest to reshape the foot.

Gentle stretching and recasting will be done every week to improve the position of the foot. Generally, five to 10 casts are needed. The final cast will stay in place for 3 weeks. After the foot is in the correct position, the child will wear a special brace nearly full time for 3 months. Then, the child will wear the brace at night and during naps for up to 3 years.

Often, the problem is a tightened Achilles tendon, and a simple procedure is needed to release it.

Some severe cases of clubfoot will need surgery if other treatments do not work, or if the problem returns. The child should be monitored by a health care provider until the foot is fully grown.

Clubfoot repair is surgery to correct a birth defect of the foot and ankle.

The outcome is usually good with treatment.

Some defects may not be completely fixed. However, treatment can improve the appearance and function of the foot. Treatment may be less successful if the clubfoot is linked to other birth disorders.

If your child is being treated for clubfoot, call your provider if: 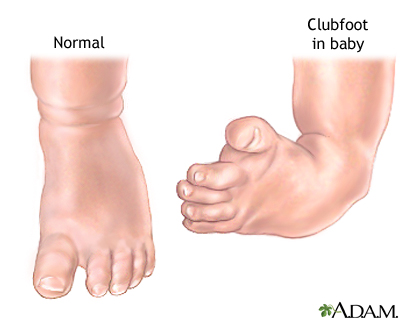 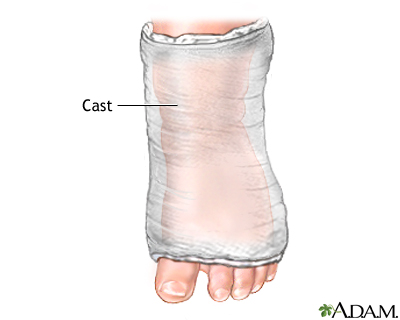 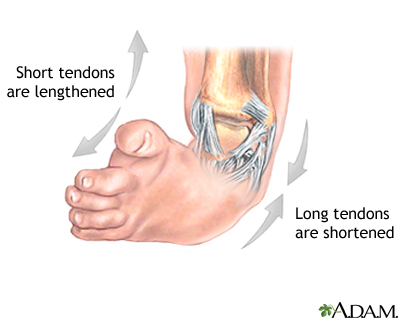 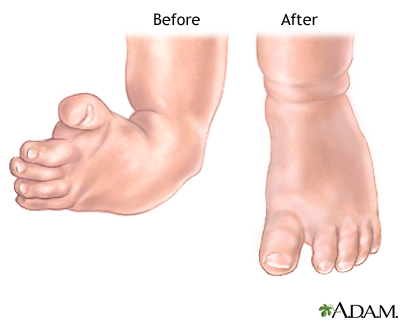