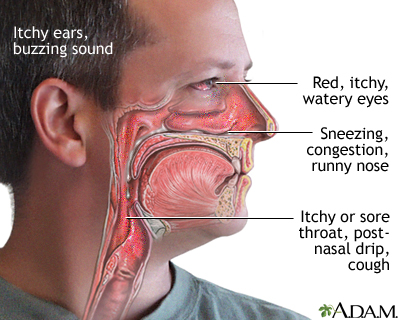 The immune system normally responds to harmful substances such as bacteria, viruses and toxins by producing symptoms such as runny nose and congestion, post-nasal drip and sore throat, and itchy ears and eyes. An allergic reaction can produce the same symptoms in response to substances that are generally harmless, like dust, dander or pollen. The sensitized immune system produces antibodies to these allergens, which cause chemicals called histamines to be released into the bloodstream, causing itching, swelling of affected tissues, mucus production, hives, rashes, and other symptoms. Symptoms vary in severity from person to person.