Circumcision is the surgical removal of the foreskin of the penis.

The penis is the male organ used for urination and sexual intercourse. The penis is located above the scrotum. It is made of spongy tissue and bloo...

The health care provider will most often numb the penis with local anesthesia before the procedure starts. The numbing medicine may be injected at the base of the penis, in the shaft, or applied as a cream.

There are several ways to perform a circumcision. Most commonly, the foreskin is pushed from the head of the penis and clamped with a metal or plastic ring-like device.

If the ring is metal, the foreskin is cut off and the metal device is removed. The wound heals in 5 to 7 days.

If the ring is plastic, a piece of suture is tied tightly around the foreskin. This pushes the tissue into a groove in the plastic over the head of the penis. Within 5 to 7 days, the plastic covering the penis falls free, leaving a completely healed circumcision.

In older and adolescent boys, circumcision is most often done under general anesthesia so the boy is asleep and pain free. The foreskin is removed and stitched onto the remaining skin of the penis. Stitches that dissolve are used to close the wound. They will be absorbed by the body within 7 to 10 days. The wound may take up to 3 weeks to heal.

Why the Procedure Is Performed

Circumcision is often performed in healthy boys for cultural or religious reasons. In the United States, a newborn boy is often circumcised before he leaves the hospital. Jewish boys, however, are circumcised when they are 8 days old.

In other parts of the world, including Europe, Asia, and South and Central America, circumcision is rare in the general population.

The merits of circumcision have been debated. Opinions about the need for circumcision in healthy boys vary among providers. Some believe there is great value to having an intact foreskin, such as allowing for a more natural sexual response during adulthood.

In 2012 a task force of the American Academy of Pediatrics reviewed current research and found that the health benefits of newborn male circumcision outweigh the risks. They recommended that there should be access to this procedure for those families that choose it. Families should weigh the health benefits and risks in light of their own personal and cultural preferences. The medical benefits alone may not outweigh those other considerations.

Some research has suggested that uncircumcised male infants have an increased risk of certain conditions, including:

The overall increased risk for these conditions is thought to be relatively small.

Proper hygiene of the penis and safe sexual practices can help prevent many of these conditions. Proper hygiene is especially important for uncircumcised males.

For older children and adolescents:

Bathing or showering is allowed most of the time. The surgical cut may be gently washed with mild, unscented soap.

Change the dressing at least once a day and apply an antibiotic ointment. If the dressing gets wet, change it promptly.

Use prescribed pain medicine as directed. Pain medicines should not be needed longer than 4 to 7 days. In infants, use only acetaminophen (Tylenol), if needed.

Call your provider if:

Circumcision is considered a very safe procedure for both newborns and older children. 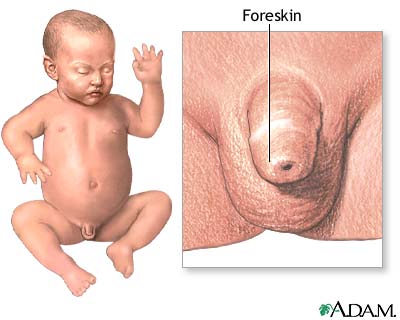 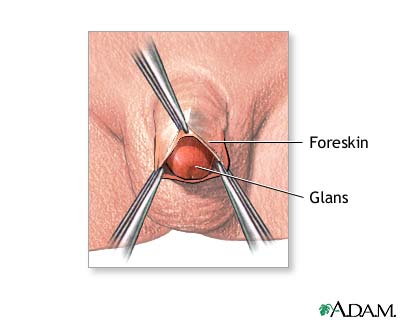 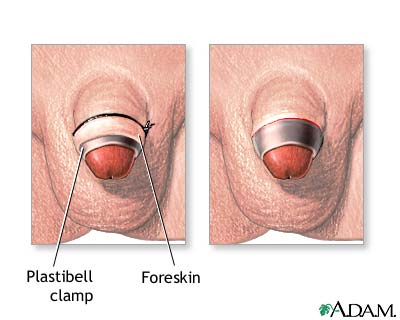 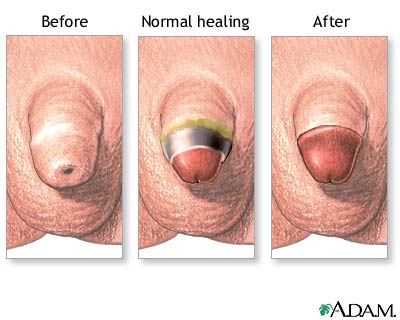