Acute pancreatitis is sudden swelling and inflammation of the pancreas.

The pancreas is an organ located behind the stomach. It produces the hormones insulin and glucagon. It also produces chemicals called enzymes needed to digest food.

Most of the time, the enzymes are active only after they reach the small intestine.

Other conditions that have been linked to pancreatitis are:

The main symptom of pancreatitis is pain felt in the upper left side or middle of the abdomen. The pain:

Abdominal pain is pain that you feel anywhere between your chest and groin. This is often referred to as the stomach region or belly.

People with acute pancreatitis often look ill and have a fever, nausea, vomiting, and sweating.

Other symptoms that may occur with this disease include:

The health care provider will do a physical exam, which may show:

Lab tests that show the release of pancreatic enzymes will be done. These include:

Other blood tests that can help diagnose pancreatitis or its complications include:

The following imaging tests that can show swelling of the pancreas may be done, but are not always needed to make a diagnosis of acute pancreatitis:

Treatment often requires a stay in the hospital. It may involve:

A tube may be inserted through the nose or mouth to remove the contents of the stomach. This may be done if vomiting and severe pain do not improve. The tube will stay in for 1 to 2 days to 1 to 2 weeks.

Treating the condition that caused the problem can prevent repeated attacks.

In some cases, therapy is needed to:

In the most severe cases, surgery is needed to remove damaged, dead or infected pancreatic tissue.

Avoid smoking, alcoholic drinks, and fatty foods after the attack has improved.

Most cases go away in a week or less. However, some cases develop into a life-threatening illness.

The death rate is high when:

Sometimes the swelling and infection do not fully heal. Repeat episodes of pancreatitis may also occur. Either of these can lead to long-term damage of the pancreas.

Long-term damage of the pancreas

Pancreatitis is swelling of the pancreas. Chronic pancreatitis is present when this problem does not heal or improve, gets worse over time, and lead...

Pancreatitis can return. The chances of it returning depend on the cause, and how well it can be treated. Complications of acute pancreatitis may include:

Call your provider if:

You may lower your risk of new or repeat episodes of pancreatitis by taking steps to prevent the medical conditions that can lead to the disease: 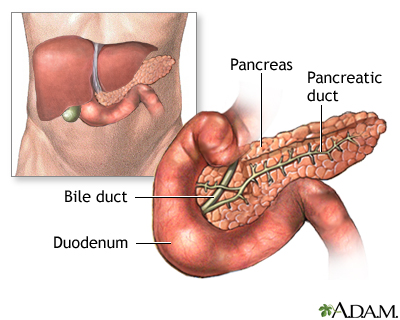 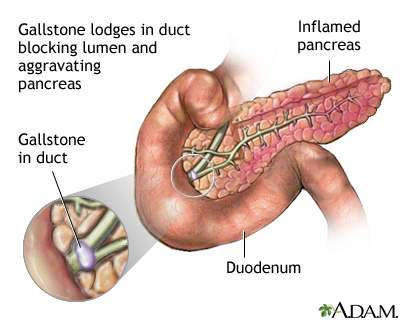 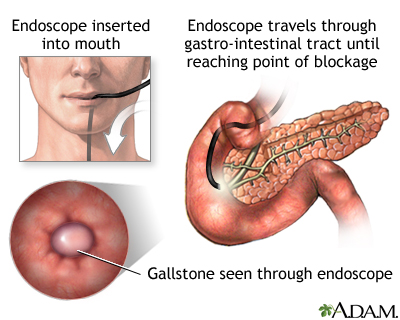